Gauguin in the 21st Century 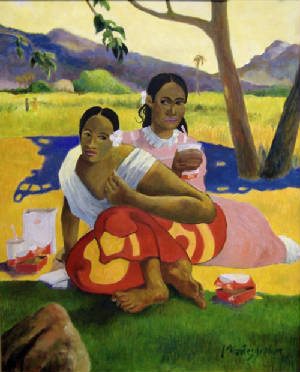 In 1874 Gauguin saw the first Impressionist Exhibition, which completely entranced him, instilling in him the desire to become a painter.
After a brief period painting with Van Gogh in 1888 in the south of France, Gauguin fled to the South Pacific rejecting the modern world and what he felt were its tired and decadent aesthetic traditions.

In Tahiti, Gauguin discovered primitive art, with its flat forms, intense colors and use of symbolism. He adapted this primitive art and incorporated it into his work. From 1891, until his death at age 55 in 1903, Gauguin lived and worked in the South Pacific.

Collectively Griesgraber’s paintings are a none to subtle satire on the primitive innocents that Gauguin idealized, thus implying there is no escaping the modern world even in the remotest of locales.

The parody paintings chronicling Gauguin’s life in the South Pacific Islands. The oil paintings are the same size as the original works – give or take an inch. The paintings remain true to the composition and colors, but each one incorporates elements of 21st Century life that Gauguin would have found very intrusive.