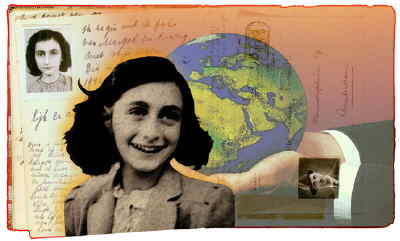 Michael Knigin was born in 1942 in Brooklyn, NY. He graduated from Tyler School of Art, Temple University where he was awarded a Ford Foundation Grant to study fine art lithography at the renowned Tamarind Lithography Workshop, in Los Angeles.

In 1966, Knigin started teaching at the Pratt Graphic Center in Manhattan, an extension of the Pratt Institute. There he started a fine art lithography workshop and opened his own company devoted to a silkscreen printing. The shop produced editions for renowned artists, including Andy Warhol, Roy Lichtenstein, and Paul Jenkins.

1974, Knigin was invited by the Israel Museum and the Jerusalem Foundation to establish the first professional lithography workshop in Israel and to train a group of young Israeli artists.

While visiting the Holocaust Museum [Yadvashem] he was given access to their archives where he saw pictures of the victims in the camps, of revolts, deportation, ghettos, liberation and of course Anne Frank. Many of the pictures had been taken by the German soldiers. Knigin said he couldn’t believe man’s inhumanity against man. He decided to copy these photographs to use in a series about this time in history.

Returning to New York in 1977, Knigin started to create his Holocaust Series. He began to transfer his archival photos to his computer and started creating his Holocaust series on the screen. He also has integrated images, symbols, textures and colors from many of his own paintings into his computer project.

About the series he said,
“I did the Holocaust Series because it was my legacy, and I wanted to remind people what we are capable of doing to other humans”.

Here you can create the content that will be used within the module.

The Chai-Lights exhibition features over 100 works by 29 of artists of Jewish descent as well as non-Jewish artists portraying Jewish imagery.

All works are original and signed by the artist. Most works are for sale with a portion of the proceeds going to support on-going exhibitions at the non-profit Southern Nevada Museum of Fine Art.