A 2008 exhibition at New York’s Jewish Museum entitled “Action Abstraction: Pollock, de Kooning and American Art, 1940 – 1976,” raised important points with respect to the differing views of two renown art critics, Harold Rosenberg and Clement Greenberg. Each critic had championed different principles and the artists who exemplified their ideas. Rosenberg, for example, believed that a modern artist’s personal signature could and should be seen in physical characteristics, such as the idiosyncratic brushstrokes that express “action” in painting. On the other hand Greenberg believed in ostensibly “impersonal” abstraction, devoid of any type of figurative suggestion.

The Neo Action Abstraction Exhibit curated by the Southern Nevada Museum of Fine Art is testament how, with the benefit of hind-sight, today’s artists are expanding on the works of earlier abstract art and artists, and the observations of the critics who focused on their works.

Each artist in this exhibition has taken what came before and built upon it, incorporating Greenberg’s and Rosenberg’s criteria, while adding their own identity. It’s a potent reminder that every generation has the ability to reconsider the rules, principles and standards by which a work of art is proclaimed important.

“Neo Action Abstraction” can be viewed as an amalgam of the styles of de Kooning, Pollack, Franz Kline and others, brought forward fifty years. The earlier artists were and are the muse for the next generation of artists and new painting styles that combine, reinterpret and push action painting and abstraction in new directions. 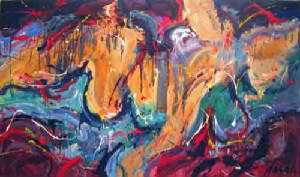 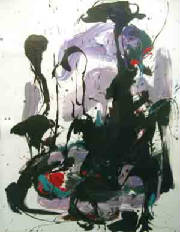 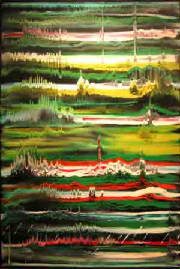